SRC helps establish the first modern seismograph network to be owned and operated by the Myanmar people.

In 2008 the Myanmar Department of Meteorology and Hydrology (DMH) began the transition to digital seismology by establishing several new broadband seismic stations throughout the country. Each station has local staff that were trained to review data and send earthquake arrival information to head office. Over time the stations were Internet enabled so that the Kelunji seismographs could send data in real time directly to an eqServer system that resides in head office in the capital Nay Pyi Taw. 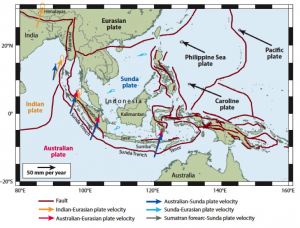 Myanmar (also known as Burma) is a beautiful country located on the eastern coast of the Bay of Bengal, and is bordered on the northwest by India, with China to the northeast, and Thailand to the east – a country with a similar cultural feel. Geologically speaking, Myanmar (top left corner of the image to the left) is in a complex tectonic plate boundary region where the Australian, Indian, Eurasian, and Sunda Plates meet, with a major fault structure running north-south up the middle of the country. Being in one of the most seismically active regions of the world, the potential for a major earthquake in the country is significant.

The magnitude 9.0 earthquake of Boxing Day 2004 occurred about 1000km south of Myanmar in the Sunda Trench fault zone.