A brief history of earthquake monitoring in Australia 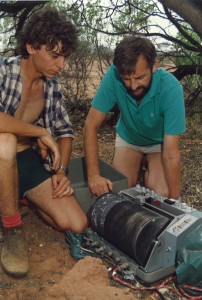 The Seismology Research Centre started at Preston Institute of Technology. The institute was renamed Phillip Institute of Technology, and later merged with RMIT University. RMIT sold the SRC group to a private company, Mindata Australia, which was in turn acquired by ESS Earth Sciences (formerly ES&S). The SRC has been operating seismographs in southeast Australia since 1976. The current network includes over 100 permanent sites throughout Tasmania, Victoria, South Australia, New South Wales, and Queensland. The SRC aims to locate earthquakes with a precision sufficient to delineate active faults, and has located thousands of events.

The Research School of Earth Science at the Australian National University (ANU) in Canberra operated seismograph networks in southeast New South Wales and eastern Victoria from 1958. These were used to determine the location and magnitude of many thousands of earthquakes, with data published in a monthly Local Earthquake Bulletin. From July 1988, only events larger than magnitude ML 2.0 were located. These Bulletins were discontinued in June 1993. Today ANU undertakes earthquake monitoring activity through the Seismometers in Schools program, along with other earthquake-related research programs.

Geoscience Australia (GA, formerly the Australian Geological Survey Organisation – AGSO, previously Bureau of Mineral Resources – BMR) in Canberra has been operating seismographs since 1962. The Mundaring Geophysical Observatory near Perth was operated by GA monitoring earthquakes in Western Australia from 1959 until its closure in 1999.

The University of Tasmania operated a seismograph network in Tasmania from 1960, including a number of telemetered sites for the Hydro-Electric Commission. The operation of a majority of this network was taken over by the SRC, and the network continues to operate today in expanded form.