An underground cavern used as a liquid natural gas storage facility needed to be monitored for vibrations while nearby civil works were being undertaken to ensure that the levels of ground motion being produced were within safety limits. 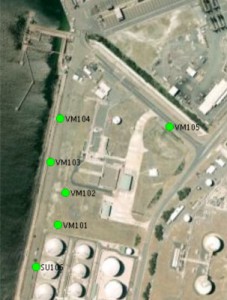 This required installing sensors along the edge of the cavern nearest the civil work, at depths of 130m, which presented several challenges. The client need to be sure of the orientation of the sensors at the end of the borehole, both in terms of tilt and rotation. As boreholes are drilled they can bend away from vertical, and in this case it was theorised that up to 30° of tilt could be expected.

This meant that the use of traditional seismometers was out of the question – they either need to be installed within a few degrees of vertical, or those that can handle greater tilt would require much larger boreholes, which are very expensive to drill.

Our team came up with an idea to use products from Geosystems to get the best data possible for this borehole situation. By using a slim triaxial borehole geophone with omnidirectional components (rather than horizontal and vertical elements) the geophone could be installed at any angle and still provide three orthogonal channels of data. But how would we know the orientation of these components at the bottom of a narrow 130m deep hole? 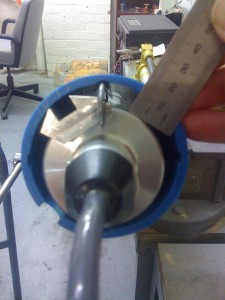 We came up with an ingenious application for Geosystem’s inclinometer casing. “Inclo casing” comes in 3m lengths and is basically a rigid plastic pipe with 4 grooves on the inside that allow an instrument (typically an inclinometer) to travel down a known path. The trick was to design a carrier for the borehole geophone to slide down the inclinometer casing guides, complicated by the fact that the client then wanted a second triaxial geophone installed above the first as a backup in case of any issues with the first geophone after it was cemented in place. We had only millimetres to spare after running the cable from the lower geophone past the upper geophone carrier – not a lot of margin error during installation.

Although rigid when locked together, inclo casing can be expected to twist during installation at a rate of up to 1° per 10m, so we could have seen up to 13° of twist in the casing. After installing the inclo casing in the borehole, the client sent a spiral sensor down along the internal grooves, producing a profile of each hole so that the position of the geophone at the bottom of the hole (both in twist and tilt) could be known relative to the top of the hole. The geophones were then lowered, and the whole system cemented into place. 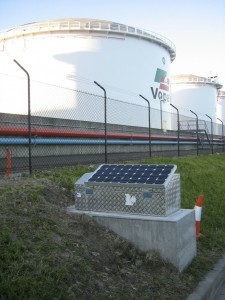 A concrete slab was created at the top of the borehole where an instrument hut was installed to house the Kelunji recorder, modem, and solar power system. Data was sent to an eqServer system in real time, generating an alert for the client if any of the geophones detected a velocity above the preset thresholds. Simply by logging into eqServer with a web browser, the state of health of the network could be monitored, as well as viewing real time data and triggered events.

Some of the boreholes did approach the theoretical twist and tilt expectations, but all were within operating range and produced great results. None of the geophones failed, so the backup sensors did not need to be used. Overall, this was a great project for the SRC, allowing us to apply our earthquake monitoring expertise on a relatively small area, drawing on Geosystems‘ product and engineering solutions.