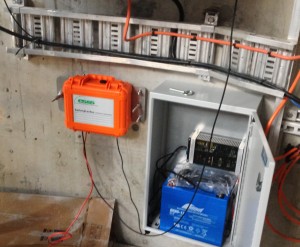 The instrument is ideally suited to structural monitoring. Although MEMS sensors are not as sensitive as those used by seismologists for research into earthquakes, they are more than sensitive enough to detect signals that are well below the level where you can expect damage to structures.

Installation is simple: the EchoPro SMA is supplied on a mounting plate which is simply bolted down and levelled using the threaded feet. The SMA can be mounted on the ground or on a wall, with the vertical component being offset by 1g due to gravity. An SMA is often oriented parallel to a wall in a structure rather than according to compass directions, but a North indicator is included for installation orientation.

The Kelunji EchoPro is manufactured by our parent company, ESS Earth Sciences, where you can discover more information on the EchoPro SMA product page.

An EchoPro SMA-specific data sheet is also available for download.