People involved in the design, construction and operation of large dams are normally particularly sensitive to earthquakes.

This is because of four factors: 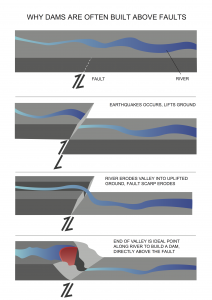 Why are Dams Often Built in Active Earthquake Areas?

Large new reservoirs can trigger earthquakes. This is due to either:

For triggered earthquakes to occur, both mechanisms require that the area is already under considerable tectonic stress.

Water pore pressure reduces the normal stress within a rock while not changing the shear stress. Under any circumstances, an increase in water pore pressure means that a failure is more likely. The critical value of shearing stress may be made arbitrarily low by increasing the pore pressure.

Reservoir induced seismicity is a transitory phenomenon which will occur either immediately after filling of the reservoir, or after a delay of a few years. If there is a delay, this depends on the permeability of the rock beneath the reservoir.

Once stress and pore pressure fields have stabilised at new values, reservoir induced seismicity will cease. Earthquake hazard will then revert to similar levels that would have existed if the reservoir had not been filled.

Even for those reservoirs that show a correlation between earthquake activity and water level, reservoir induced seismicity does not continue indefinitely as it is limited by the available tectonic energy.

Depths of reservoir induced earthquakes, especially those occurring immediately after filling of the reservoir, are normally very shallow. If detailed seismograph coverage is available, then depths within one to three kilometres of the surface are common.

Induced earthquakes at reservoirs that have experienced delayed triggering may be much deeper, perhaps as deep as ten to twenty kilometres. These may occur ten to twenty years after filling of the reservoir.

It is not easy to predict whether a new reservoir will experience reservoir induced seismicity, because the two most important factors – the state of stress and the rock strength at earthquake depths – cannot be measured directly.

This is the same reason why prediction of normal (non-induced) earthquakes is normally unsuccessful.