Seismic recorders are usually located in remote areas in order to be as far away as possible from sources of “cultural noise”, in the Australian bush this means they may on occasion be exposed to extreme temperature conditions and hazards such as bushfires. 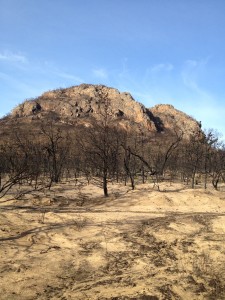 In January 2014 one of our recorders survived being engulfed by bushfire. The site, located near Mt Zero at the northern end of the Grampians in western Victoria survived intact with only the phone line used for data telemetry damaged, despite temperatures in the near vicinity being high enough to melt aluminium cans discarded in the bush nearby. 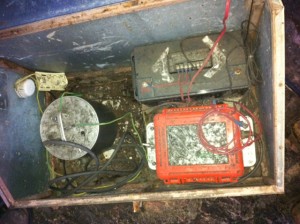 Records from the state of health logged by the recorder show that the fire damaged the telephone line around 8:30 pm on January 17 but the maximum temperature inside the seismic recorder occurred around two hours later and was only about 55 degrees as measured inside the recorder mounted inside the metal enclosure.

Installation of the recorder on a bare outcrop of rock certainly would help the instrumentation survive and the metal enclosure greatly helps to block the high radiant temperatures generated by the fire.

Restoration of the site simply involved cleaning the ash out of the enclosure, replacing the phone line with a wireless broadband modem and a new coat of paint for the enclosure. 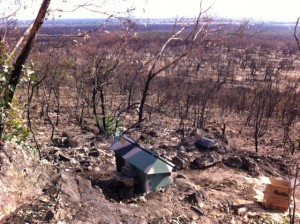