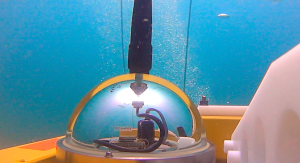 The SRC has supplied 20 ocean bottom seismographs (OBS) to AGOS, the Australian Geophysical Observing System. AGOS acquires instrumentation to be made available to researchers Australia-wide to monitor the Earth’s crust, and these OBS systems are the latest addition to Australia’s research arsenal.

The OBS systems, manufactured by Guralp Systems in the UK, are designed to be deployed to depths of up to 6km for up to 12 months. The pressures at these depths are enormous, so the instrument housings are made from titanium for durability, longevity and reliability.

The OBS has releasable concrete ballast to help it sink to the ocean floor, and is fitted with a high-tech buoyancy material known as syntactic foam – the yellow blocks bolted to the OBS frame. This is the same material that made up 70% of the volume of the DEEPSEA CHALLENGER submarine used by Titanic director James Cameron to descend 11km into the Mariana Trench, the deepest part of the world’s oceans.

Once the OBS sinks to the ocean floor, the sensor orients itself and starts recording data. The OBS can be pinged from several locations the surface, and the position of the seismograph determined using triangulation, the same technique we use to locate earthquakes.

When the OBS needs to be recovered, a coded acoustic signal is sent to the OBS which initiates the release of the concrete ballast, assisted by carbon fibre leaf springs, allowing the OBS to float back to the surface.

Once on the surface, the OBS reads its location using GPS and transmits that information by AIS radio, as well as activating a high-intensity LED beacon for visibility when it is dark. An OBS can drift on the currents quite a distance while descending and resurfacing, but by pinging the OBS every few minutes its position can be tracked pretty accurately.

This video shows a shallow water test deployment with ropes attached for ease of recovery, but it is a different story when an OBS is deployed in deep water. After the surfaced unit it spotted, it needs to be hooked and hoisted back onto the ship, which can be difficult in rough seas.

Very often little is known about conditions at the bottom of the ocean, and there are many factors that can affect the recovery of an OBS: it might drift under a shelf, blocking its ability to resurface; it may tumble into a deep sea ravine; or it might get snagged on ocean rubbish such as fishing nets – there is no way of knowing for certain, but the Guralp design is as compact as possible to minimise its profile.

For more information visit the AGOS and Guralp websites