Monitoring the earth before, during and after fracking.

There is much discussion at the moment about rock fracturing (fracking) from geothermal energy production, coal seam gas extraction, and carbon-capture activities and their links to earthquake activity. In this article we’ll explore what this means in simple terms, and what we can do to learn more about how these activities impact on the earth and on society.

Let’s start with earthquakes. What is an earthquake? Quite simply, earthquakes are the vibrations caused by rocks breaking within the earth. Why do earthquakes happen? When the stress placed on a section of rock exceeds the strength of that rock, it breaks. What causes the stress to build up? There are a variety of sources.

Imagine that the tectonic plates that make up the cracked outer shell of the earth are floating around on a sea of molten rock. Most earthquakes around the world occur at the margins of these plates. The tectonic plates are fused together where they join, but this is their weakest point, and when too much stress has built up from being pushed around by other plates, they break at these “tectonic plate boundaries”.

So, why then do we have earthquakes in Australia if it is in the middle of a tectonic plate and not near a plate margin? The  Indo-Australian plate is being pushed North as the crust is spreading under the Southern Ocean where new rock is coming to the surface. The plate is being pushed from one side, so the stress builds up within the plate as well as at the margins. Within the plate there are areas of weakness, or “faults”, in the rock, and sometimes the stress that is being subjected to the whole plate is released through small breaks at these faults. These are known as “intra-plate earthquakes”.

Some human activities may alter the stress distribution. When we change the stress distribution in a section of earth, we can alter the way that the earth releases its stress. When we dig an underground hole, such as mining tunnels and caverns, we change the structure of the rock that was sustaining the prevailing stress. When we build a dam, we are storing much more weight on a previously unloaded section of earth, and allowing much more water to permeate into the earth, changing the pressure in the rock below. Similarly, when we force fluids into the earth, we are altering the stress in the rock. In most cases, naturally or by design, these load changes do not significantly affect the rate of earthquake activity, but in some cases these activities can cause rock bursts, trigger earthquakes prematurely, or cause unexpected fractures.

“Fracking” seems to have a negative connotation, but breaking rocks to extract resources for human advancement has been happening for a long time and in many different ways. Let’s look at the case of geothermal energy production and understand how fracking is used to draw on the earth’s renewable natural heat to create energy.

The most common way of generating large amounts of electricity is to heat water to the point that it becomes steam, which under pressure is used to spin turbines that use magnets and coils to produce electricity. The method of generating heat to boil the water is varied – we burn coal, gas, and oil, and also use nuclear fuel. The heat within the earth is a seemingly limitless supply of water-heating energy, but accessing it is not a simple task. In some areas the heat within the crust is sufficient at depths of just a few kilometres to be used for heating water. We can drill boreholes down to these depths and pump water down into these “hot rocks”, and the way that the heated water and steam comes back to the surface for energy production is where the fracking comes in.

There are natural fractures in the rock structures below the surface of the earth, and these act as conduits for fluids. In some cases, to be of sufficient capacity for energy production, the fractures need to be expanded and additional fractures created so that the heated water can flow through the energy production system at a reasonable rate. Pumping fluids into the earth under pressure will do this, but how is it done in a controllable way? Monitoring the fracture activity using vibration monitoring instrumentation (seismographs) is the best way to see what is happening.

By definition, fracking is breaking rock within the earth, and these breaks create vibrations. The scale of these breaks is generally very small and not sufficient to cause perceptible “earthquakes”. As previously discussed, rocks naturally break due to tectonic pressures, and often these earthquakes are also small and imperceptible to the population. Seismographs are able to detect these micro-seismic events, but they need to be located near to the source of the break to see the vibrations.

There is not always a detailed history of earthquake activity in areas where geothermal energy production is feasible. This can lead people to assume that the natural level of seismic activity (seismicity) is lower than it may be. The only way to know what the background level of seismic activity is for a particular area is to install a micro-seismic monitoring network of seismographs, ideally for a number of years, to establish a baseline level of natural activity.

The Seismology Research Centre (SRC) has been monitoring earthquakes in eastern Australia, particularly in Victoria, for over 35 years. Their network of seismographs is distributed amongst its clients’ assets but does not provide uniform coverage across the state. In some areas, the network records small earthquakes (down to below magnitude zero) where there are many seismographs close to each other, but only larger earthquakes (above magnitude 3) in others where the nearest seismograph may be dozens or hundreds of kilometres away. 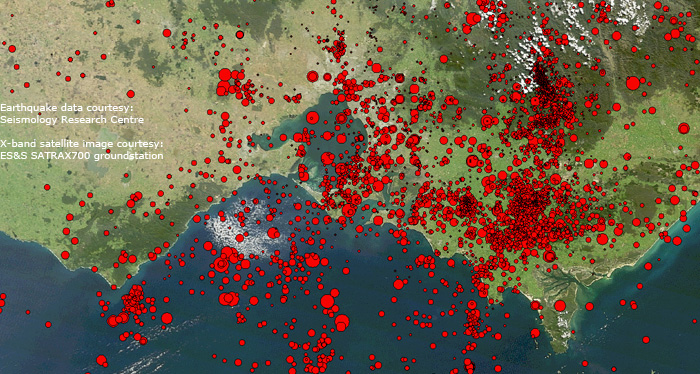 For Victoria, the historical database of micro-earthquake activity recorded by the SRC is extremely valuable. Although their network does not necessarily have the resolution to indicate what the natural seismicity in all proposed geothermal energy or coal seam gas producing areas might be, it can easily be expanded to provide this level of coverage. It is highly recommended that baseline seismic monitoring is performed for as long as possible before energy production begins.

The seismographs used for determining the baseline seismicity can then continue to be used after energy production begins. In addition to monitoring the region for changes in seismic activity rates, more detailed monitoring is required at the fluid injection site to monitor the progression of the fracturing. The breaks from fracking are generally very small, so very sensitive equipment needs to be installed very near to the source of the events. The locations of these events are plotted in three dimensions to provide the operators with a picture of the effects of fluid injection so that they can modify their activities if required. In addition to vibration monitoring, the earth needs to be monitored for deformation using tools such as tilt sensors. The underground reservoirs can change shape very slowly and not necessarily with dramatic fractures, so long term monitoring of the subterranean and surface movement is equally important.

Seismic monitoring is extremely important in any situation where human activity may change the stress regime in the crust of the earth, be it through nuclear explosion testing, geothermal energy production, storing carbon emissions underground, or extracting minerals or gases from the earth. The need for seismic monitoring is recognised by established industries such as those involved with water storage and mining, and it is important that emerging industries such as alternative and renewable energy do the same.

Everything that we do to the earth has an effect, but this does not mean that we don’t do them. Society could not progress if we didn’t try new things. It is simply our responsibility to approach these activities with all of the available knowledge and proceed with caution to ensure the safety and sustainability of our society.