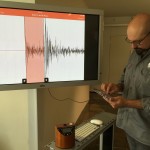 This earthquake has been widely felt in Melbourne’s southeastern suburbs and in the Gippsland region, and it is possible that it could be felt at up to 50km from the epicentre. The earthquake was around 18km deep, and an event of this magnitude and depth is unlikely to have caused damage.
In the few hours since the earthquake there have been no aftershocks, which is in contrast to yesterday’s Korumburra earthquake of similar magnitude which had at least 9 aftershocks in the 24 hours after the earthquake. The Korumburra event was much shallower at around 8km deep, and was 50km further east (about 100km east of Melbourne). The difference in behaviour is not unusual because the two earthquakes have occurred on different faults.
The Gippsland region of Victoria has a higher-than-average level of seismic activity compared to Australia overall, so although it is unusual to have two earthquakes so close in space and time, it is not unusual to have earthquakes in the area. The last largest earthquake in the Pakenham area was in 2001, a magnitude 3.6 event with its epicentre about 6km away near Tooradin.

2014 December 3 @ 3:34am AEDT, Korumburra VIC Magnitude 3.4
This earthquake occurred about 2km northeast of Korumburra, approximately 100km southeast of Melbourne, VIC. This earthquake has been felt in the surrounding area.  Several aftershocks have been recorded, the largest of which was a magnitude ML 2.1.

2014 November 19 @ 4:13pm AEDT, Near Gundagai NSW Magnitude 3.4
This earthquake occurred about 20km southwest of Gundagai in NSW, around 60km east of Wagga Wagga. It has been reported felt in the local area.

2014 July 12 @ 6:25am AEST, King Valley, Magnitude 2.5
This earthquake occurred in the King Valley, approximately 185 kilometres northeast of Melbourne, VIC.  It was followed 5 hours later by an aftershock of magnitude ML 2.1.

2014 February 27 @ 12:49pm AEDT,  West Wyalong NSW, Magnitude 3.7
West Wyalong has a long history of earthquake activity, with this latest event being the largest in the area since 1999. It was followed 4 minutes later by an aftershock of  magnitude 2.7.  An aftershock of magnitude 3.0 was recorded on March 1st.

2014 February 2 @ 5:57pm AEDT,  Eugowra NSW, Magnitude 3.0
This earthquake occurred near Eugowra in central NSW, about 50km west of Orange. In the 1990s there was a swarm of several hundred earthquakes in the shallow outcropping granite near Eugowra. The SRC installed an aftershock network and recorded our highest ever ground acceleration of over 1g from the largest earthquake in the sequence, a magnitude 4.1.