The very first hazard report prepared by the SRC was in 1977 for Dandenong Natural Gas Tank in Victoria. This study was commissioned prior to construction of the tank, so earthquake loading was considered as a factor in its engineering. The tank has yet to undergo significant shaking due to earthquake (the largest nearby event being a magnitude 2.9 in July 2000) but it is reassuring that the engineers had the forethought to consider earthquakes in their design.

Since then SRC have prepared a total of over 500 seismic hazard reports for many engineered structures that have included water storage dams and outlets, hydroelectric dams and power stations, mines (both coal and mineral tailings dams), gas pipelines, offshore platforms, onshore structures such as LNG plants, and a variety of other miscellaneous structures. 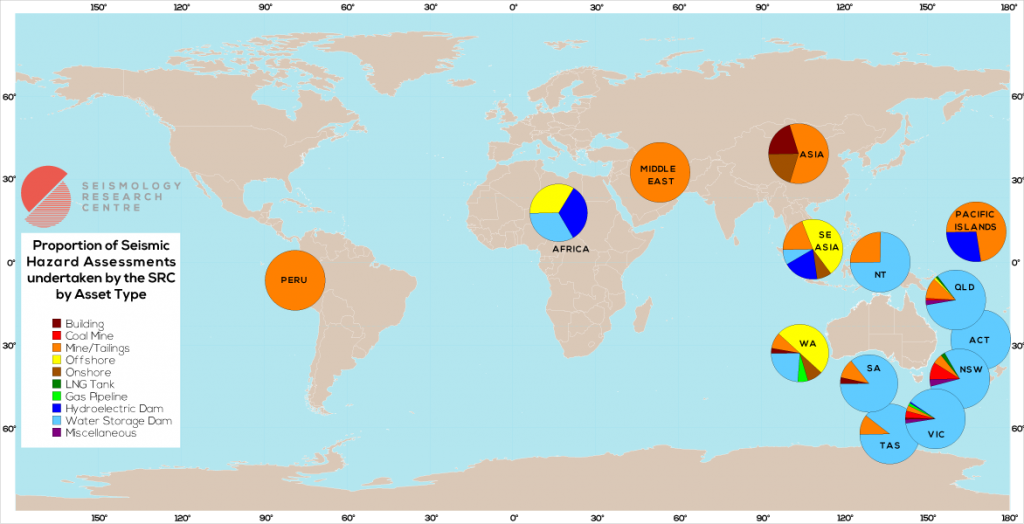 A map showing the proportion of seismic hazard assessments that have been prepared globally shows the breakdown of asset type with respect to geographic region.

From humble beginnings in 1985, our seismic hazard assessment process has evolved as new methodologies and scientific approaches develop. So too has the Probabilistic Seismic Hazard Assessment using the Cornell-McGuire method.

It is evident from the above map that the SRC specialises in hazard assessments largely for water storage dams within Australia. The other asset classes  shown on the map include hydroelectric dams and power stations, mine tailings dams, buildings, and gas facilities. The miscellaneous structures cover towns, airports, bridges, railways, geothermal interests, nuclear power and desalination plants.

The SRC is actively involved in assessing the seismic hazard at all stages of asset development. Our staff have been involved in the development of ANCOLD and ICOLD guidelines in seismic matters. We believe this is a hugely important process as large earthquakes can affect more than just the assessed structure – it can have a great impact on the livelihood of local communities that may be affected by the failure of the asset.

For any assistance or requests to prepare PSHA studies for dam safety reviews and dam designs, or any other assessments of significant engineered structures, please contact us.