The recent earthquakes that have been felt in Melbourne serve as a reminder to the population that Australia does have earthquakes regularly, although not as often as in other parts of the world such as New Zealand. On average, there are several earthquakes in eastern Australia every day. In recent months earthquakes have also been felt in the A.C.T., Geelong (Victoria), and in Young and Tamworth in NSW.

Places like New Zealand, Indonesia, Japan, and the west coasts of North and South America are “plate-boundary” regions that have the potential for Great earthquakes (around magnitude 9), whereas the maximum credible earthquake for an intra-plate region like Australia is a magnitude 7.5 event. If located near a major city, even a magnitude 6+ could have major consequences, unfortunately demonstrated recently in Christchurch, New Zealand, where a 6.3 devastated the city. Although near a plate boundary, that earthquake was far enough away to be classified as an intra-plate earthquake. For a simplistic explanation on how earthquakes and tectonic plates relate, have a look at the first few paragraphs of this article.

The most recent earthquake sequence near Moe, in Victoria’s Gippsland region (about 110km southeast of Melbourne) began on 19 June 2012 with a magnitude 5.5 earthquake, the largest in Victoria since the magnitude 5.7 Mt Hotham earthquake in 1966. Moe aftershocks continue, with the largest to date being of magnitude 4.2 on 20 July 2012. Both the 5.5 and 4.2 earthquakes were felt in Melbourne, the former across most of the metropolitan area. Fortunately for those near the epicentre there was no major damage.

The obvious question people are asking is “Why are we having so many earthquakes in Melbourne now?”. With the Korumburra earthquakes (two of which were also widely felt in the metro area) in the 3 years before the nearby Moe events, it’s a reasonable question. Is it unusual? Yes. Is it unexpected? No. It is predictable? No, not in any useful time frame.

This particular region of Victoria is known to be more seismically active than others, as evidenced by the Great Dividing Range and Latrobe Valley, formed over millions of years from earthquake activity. From that perspective, it is not surprising that we are having earthquakes in this region. Events here will unfortunately affect the local population, but they do not pose a great risk to the population in the Melbourne metropolitan area, as many might assume following their recent experiences. There are seismically active regions much closer to the CBD than people realise, as shown below. 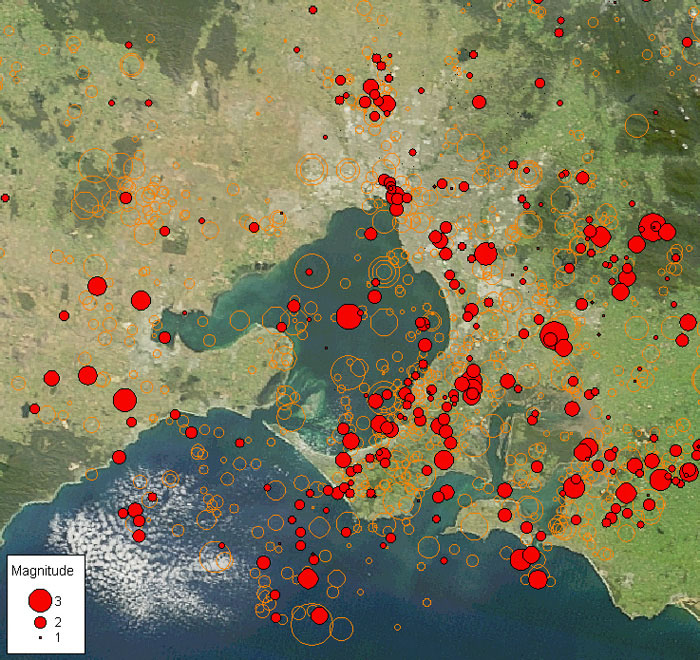 The earthquakes shown in the image have been catalogued and detected by the high-density seismograph network operated in Victoria by the ES&S Seismology Research Centre, established in 1976. The earthquakes shown as red dots are those that have occured since January 2000, with the orange circles pre-2000 events dating back to 1837. Most of these earthquakes were too small or too deep to have been felt, although even an earthquake as small as the most recent event in the Melbourne metropolitan area, a magnitude 1.1 located under the suburb of Toorak, was reportedly felt in South Yarra, Prahran, Hawthorn and St Kilda.

This map clearly demonstrates the benefits of high-density seismograph networks, where small earthquakes can be detected revealing active faults. Without nearby seismographs, most of these earthquakes would have gone un-noticed or would have been poorly located. The Australian Government monitors earthquake activity Australia-wide, and as such can only monitor to a certain resolution given the land area that needs to be covered and the limits of budget spending in this area. A quick query of the online public earthquake catalogue shows a distinct gap in the earthquake activity of this region, which will be true for any region where seismographs are sparse. The Seismology Research Centre is fortunate to operate high-density seismograph networks near many major towns and cities in eastern Australia, allowing them to provide rapid valuable earthquake information to their subscribers.

A large earthquake could occur in any region of Australia, possibly where we have not seen any activity in the last 200 years (since records began). Remember that geological time frames are discussed in thousands and millions of years, so although it would appear from the map above that the Mornington Peninsula and the Selwyn fault might be epicentral region for a large earthquake near Melbourne, it could just as easily be in Geelong, or Bacchus Marsh, or anywhere else!

The challenge facing emergency services during a significant event in a highly-populated region is to know how best to deploy their limited resources following an earthquake. Knowing the location of the epicentre accurately is critical – if the location is wrong by 10km, it could mean sending teams to the wrong town, or to the wrong side of Port Phillip Bay. Accurate locations can only come from high density seismograph networks like those operated by the Seismology Research Centre. It is simply not possible to get this level of accuracy in the critical minutes after an earthquake using data from seismographs hundreds of kilometres away.

To respond to a public emergency immediately following a large earthquake, knowing the magnitude is less important than knowing the location. Any earthquake above magnitude 4 that occurs in a densely populated region will be widely felt – reports will come from all areas, and each person will believe what they experienced is most significant. The reports that may get through from people near the epicentre matter most in these initial stages, hence the importance of rapid accurate earthquake location information.

ES&S proudly operates its earthquake observatory for the benefit of its customers, to provide them with the best information as quickly as possible after an earthquake, assisting them in quickly implementing their emergency response plans. If your organisation requires timely and accurate earthquake notifications, please contact us to find out more about our earthquake alarm service.